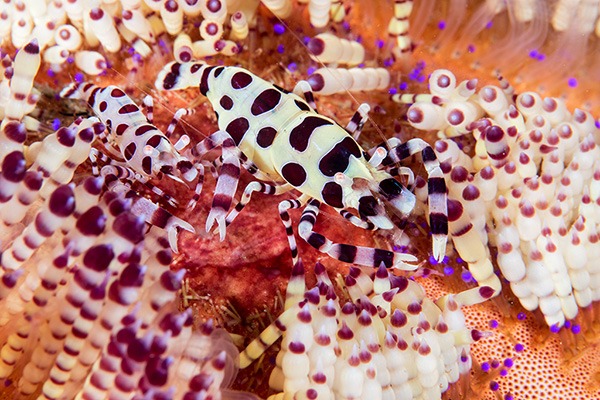 Well protected animal matter: Coleman´s shrimp in a very painful fire urchin!
There are exceptions, however. Sea stars come to mind. These extremely docile animals slowly make their way over the ocean floor, and very few of them seem to be protected in any particular way. Crown of thorns, and a couple more, has venomous spines, but in general there are no consequences of touching sea stars. So how can they survive with such a blatant display of meat in a place full of hungry predators? 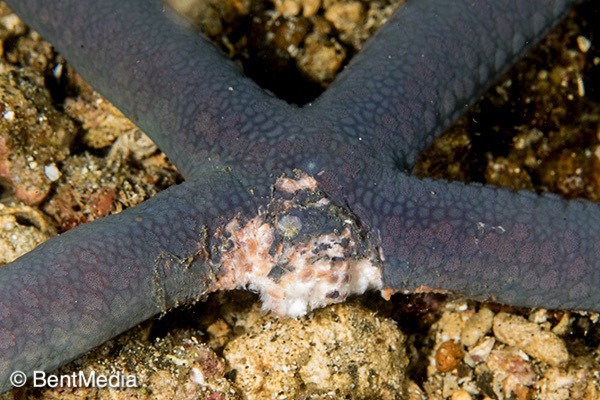 An unlucky sea star.
The answer is probably due to the low percentage of nutritious matter in a sea star. Much like plants, sea stars are more or less filled with a non-digestible skeleton, not only lowering the ratio of edible to non-edible mater, but also making it physically hard to actually eat the sea star even if one wanted to. 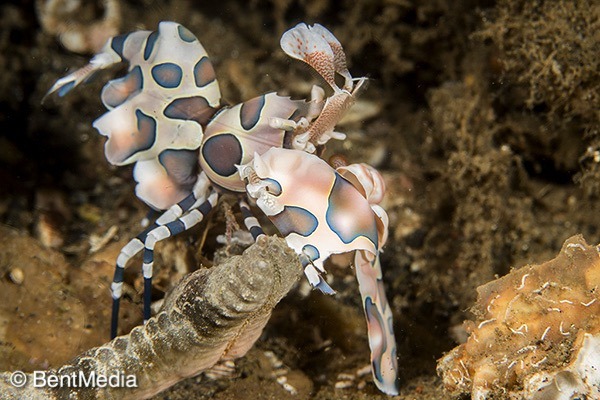 Harlequin shrimp, eating one of the less photogenic sea stars that they often use as food
Of course, no one gets of the hook permanently in nature. Several animals that use sea stars as their only food item have evolved. The most important might be the triton shells checking numbers of crown of thorns, but the most famous is probably the harlequin shrimp, which very often can be seen here in Lembeh. Despite the fact that photographers only seem to find harlequin shrimp on the nice, blue Linckia sea stars, harlequin shrimp actually eat a lot of other sea stars, and, would you guess, sea stars less photogenic than the Linckias. Harlequin shrimp use specialized front legs to tease out the edible matter from all the rest, looking like an old fashioned sowing machine. Mating pairs often work together in flipping over sea stars and attacking the tube feet and central disc of the sea star. 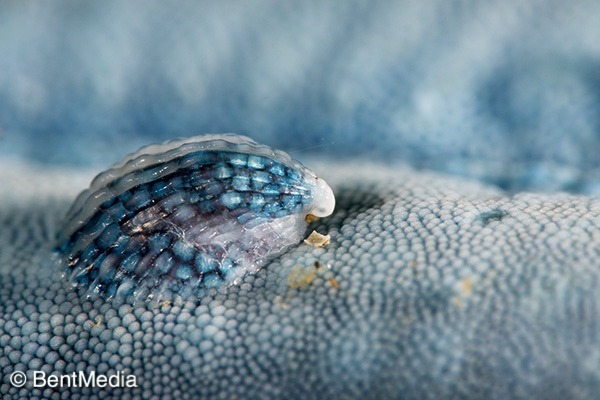 Thyca crystallina, sitting and eating on its dinner
Another specialist on sea stars, and mainly Linckias, are the small, but beautiful blue parasitic shells, Thyca crystallina. These shells attach to the sea star, and devour it ever so slowly. I do not know how much these shells actually damage the sea star, but they can be quite numerous on certain individuals. However, even if a sea star is attacked and parts of it is devoured, sea stars have excellent regenerative skills, and can often survive the loss of one or even several arms.
Categories: Biology
Tags: BiologyfeedingParasite