When I arrived in Lembeh this time it was just after Christmas. However, I was up for another Christmas treat. Simon here from NAD had ordered a bunch of cool stuff from Nightsea, strobe filters, filters for the lens and a cool pair of yellow spectacles, which waited for me here.  I have now tried this system during my stay and will in this blog give a short overview over what I learned from shooting it. But first of all I want to give a brief explanation over what fluorescence is, and why we can find it in nature. BTW, the complete system is available for rent here in NAD if you wish to try it out. 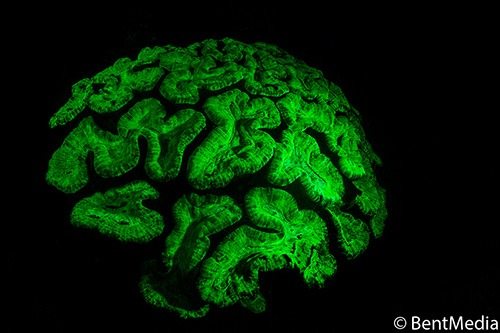 Fluorescent hard coral
First of all, fluorescence is often confused with bio-luminescence. Bio-luminescence is found in more and more animals, and in a number of mushrooms as well. Well-known examples are those of plankton giving of light when disturbed, deep-water organisms with light organs, mushrooms glowing in the forests, fire flies and for northern areas glowworms. Bio-luminescence is the emitting of light involving a chemical reaction. Very generally, the light emitting substance is a protein called luciferin, which emits light through a chemical reaction catalyzed and oxidized by an enzyme, called luciferase. Thus, a chemical provides the energy fueling bio-luminescence, using oxygen in the process. 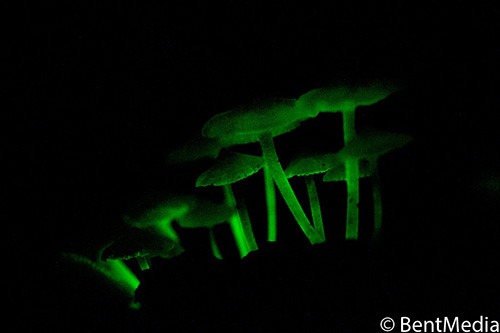 Bio-luminescing mushrooms
Fluorescence, in contrast, is the emission of light where energy from one (or on rare occasions two) photon excites an electron into a higher energy orbital. After a short time, the electron will return to its former level, emitting the excess energy as light of another wavelength. No oxygen will be used in this process, as the light emittance is fuelled by the energy in the photon. Many different subjects in nature fluoresce. Despite that, we can seldom see the fluorescence, as the emitted light level is low, or in wavelengths we cannot detect. One notable exception is the red or orange anemones that we sometimes can se in much deeper water than red and orange colors from sunlight penetrate water. Despite being fairly poorly understood on a biological level, fluorescence is used in many applications, from mineralogy, oil detection, microbiology and forensic work. 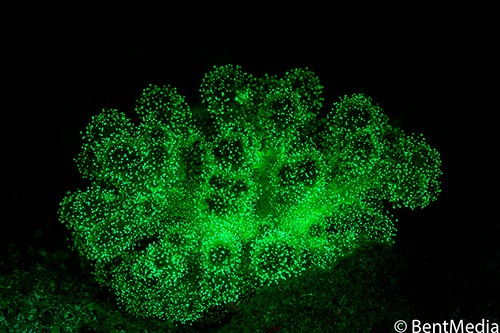 Fluorescent hard coral
So why do things bio-luminesce or fluoresce? Bio-luminescence in marine systems is used for at least three widely different purposes. Most of the deep-sea bio-luminescence seems to be used in order to attract prey.  Second, a number of fish living in the zone deep enough for a little light to get through, use bio-luminescence to counter shade the ventral side of them, so shading against the faint surface light can not be used by predators to find prey. Third, and maybe most speculative, it is thought that small crustaceans that bio-luminesce do so to deter small predators. Why would small predators be afraid of light? Well, if a small more or less translucent predator eats a bio-luminescing crustacean, the small predator will light up and attract the next step upwards in the food chain, increasing small predators risk risk of being killed them selves. 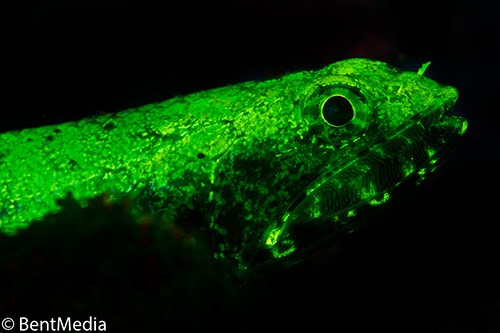 Fluorescent lizard fish
What is the point of fluorescence in marine systems? For a number of shallow water cnidarians, mainly the ones using zooxanthellae for their energy input, fluorescence has been suggested to be a way to control excess levels of sun exposure, limiting the damaging effects of uv-light. 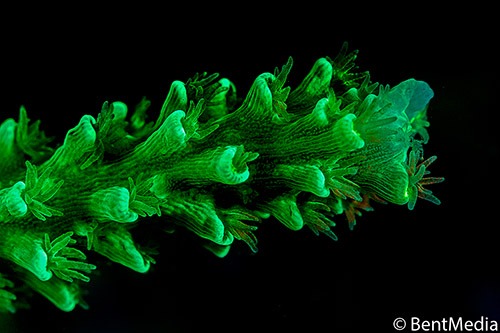 Fluorescent hard coral
Both proteins in the coral itself as well as chlorophyll in the zooxanthellae associated with the coral may fluoresce. The available evidence, however, does not really support this theory. 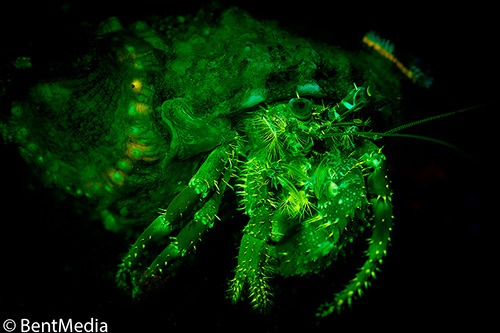 Fluorescent hermit crab
A number of other animals fluoresce. Some crustaceans, such as the anemone hermit crab fluoresce. Also some bristle-worms, fish and cephalopods fluoresce. There seems to be no reason for these animals to fluoresce, so much fluorescence simply seems to be a side effect of other processes in living creatures. Whatever the cause of fluorescence it really is quite magical to see the different sources of fluorescence light up leaving the rest of the surroundings pitch black when diving. Try it out, it is an experience I am sure you will not forget! 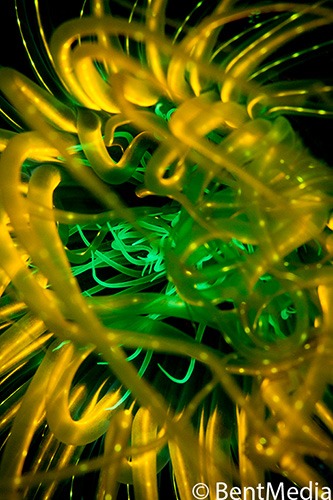 Fluorescent anemone
What did I then learn from shooting this system? A to me very surprising fact is that people are not wildly enthusiastic over the results! That might of course be my results that are lacking. Furthermore, the best results, bleak as that may be, are when there are more than one fluorescent color in the picture. Third, and maybe most important is that it is a lot of fun to try it! I look very much forward to try it on coral reef sites such as in the Red sea as well as on land in rain forests. In a month or so I might get back to you with results from that.
Categories: Biology
Tags: BiologybioluminescenceCoralCrittersfluorescenceLembehLembeh StraitNADNad LembehPhotographyResort