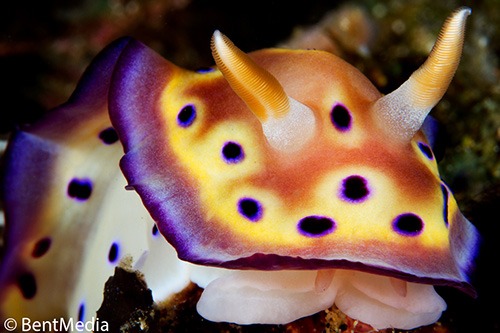 Bright warning colours on nudibranch. Probably a result of natural selection favouring nudis clearly advertising their poisonous properties.
There is  another kind of selection, sexual selection, that is a little bit harder to understand. Sexual selection is the process where traits that directly affect the likelihood of securing a mate is changed over time, leading to the evolution of traits that sometimes seem to act contrary to natural selection in that sexually selected traits rather decrease life expectancy and growth rates. There are many examples of traits governed by sexual selection on land. Bird song, brightly colored males in many birds and lizards, antlers on deer and males adapted for fighting other males for access to females are examples that we all can relate to. It is thought that sexual selection in terrestrial systems are well as important as natural selection in shaping many aspects of populations and also a major force in driving speciation. 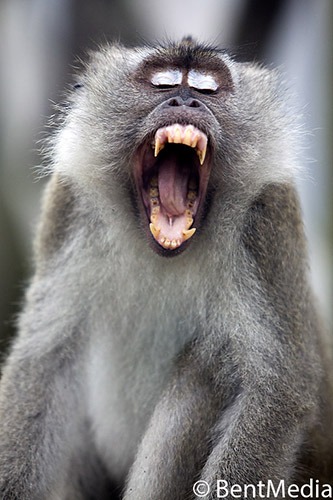 Male macaque with teeth adapted to fight other males over harem rights
Are there examples of sexual selection in marine animals? Well, such examples are without doubt not as obvious as on land. The most obvious is dimorphism between sexes, that is that the two sexes differ in size.  Many fishes, such as many species of wrasses and groupers, have males that are much larger than females. Males of such species secure their mating by either fighting with other males for mating rights or showing of to females in order to make the female choose the performer.  This is certainly a sexually selected character. Some crabs seem to have very large males as compared to females, and that could be related to mating coinciding with female molting. Males can detect this molting some days before it actually happens, and try to protect “their” female from other males. Thus large males will be able to fend of smaller males, thus monopolizing pre-molting females. 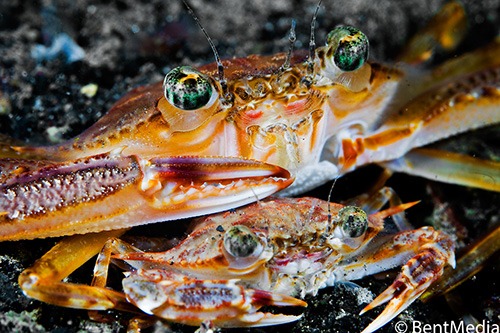 Large male crab guarding female crab against other males
When females are lager than males, it is very seldom a sexually selected character. In most marine monogamous species with a size difference between the sexes, the female will be the larger. This is not due to the female competing for mates, as the pair is monogamous, but rather that size affects egg production positively much more than size affects sperm production. Thus, in many cases, it makes sense for a monogamous pair to consist of a large female and a small male. 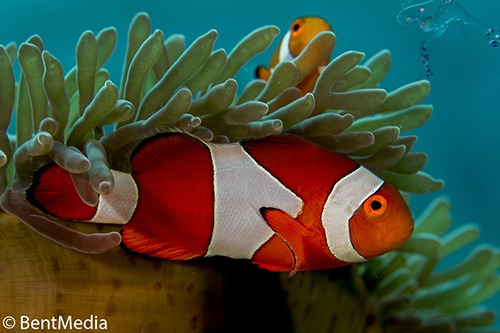 Large female false clown anemone fish with small male
Another possible example of a sexually selected trait could be the extraordinarily long “nose” that some xeno crabs have. I have no idea if this is correct, or even if “nose” length of xeno crabs are related to sex, but is could be. 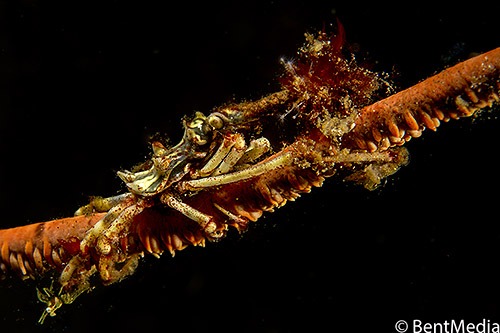 Xeno crab with an extremely long “nose”
Otherwise, I find it surprisingly rare with clear sexually selected traits in marine animals. It could be related to the mating methods many marine animals use, where sex cells are released into the water and is more or less anonymously left by themselves to find a suitable cell to fuse with. This method of mating somewhat precludes mate choice or mate competition, thus making the force of sexual selection very weak compared to that of natural selection.  I will get back to mating methods on reefs and reef-near areas in a later blog.
Categories: Biology
Tags: CompetitionCrittersDivingevolutionLembehLembeh StraitMuckNADNad Lembehsexsexual selection