How to Blackwater Dive in Lembeh

How to Blackwater Dive in Lembeh

Before COVID messed everything up – we were seriously kicking butt at Blackwater Diving in Lembeh. We’d drafted a book, made some movies and Simon was having a great time diving at night, being anti-social and generally avoiding work in the daytime! Things have changed a little since then, but here goes on how to blackwater dive in Lembeh!

As things open up we’re going to do a slow-start on the blackwater diving – so rather than organising a week’s worth of diving during the wrong time of the year we will resume our blackwater schedules towards the end of this year, and push hard on it at the beginning of 2023.

You can still book a blackwater dive with us on-site before then, but based on our experience we don’t think it will be the ideal time – so we will make decisions based on conditions and what we find during our various attempts during the blackwater ‘off-season.’

Some anecdotes to learn from…

We’ve had good times and bad times on blackwater dives – Simon alone has done approaching 1000 of them in Lembeh over the years. Our guides have obviously done a huge amount between them. We’ve mostly got it right, but feel that it’s only fair to point out that it doesn’t always go to plan. Here we will try to paint a picture of when it goes right and when it goes wrong, in the hope that you can learn from our experiences and apply them during your blackwater dives in the Lembeh Strait.

One of the most important aspects to blackwater is preparation. That means you’ve thought about what needs charging during the day, not hammered your no-deco time on the afternoon dive, had plenty of water and are generally feeling pretty chilled before you slip into that ‘freezing’ 28C wetsuit hanging on the railing.

The list above is based on all the mistakes we’ve made and seen over the years blackwater diving. Your guides are generally risk averse when floating around in the darkness, if you stay close to them you will avoid any spooky situations such as holding your light to your chest and attempting to find the downline.

If you’re partnered up with a buddy you don’t know, or more likely one that you know is useless, then we recommend that you keep the downline in view and in the same horizontal plane, are you looking up at the lights? It’s time to come up… slowly.

Remember that even though we have an amazing guest to guide ratio of 2 guests to 1 dive guide, if you both swim off in opposite directions then the guide will have to choose one of you to herd back to the downline first, before trying to find the other one. This happens often and has directly contributed to the increasing baldness in the dive team since we undertook blackwater diving.

Manage your expectations and risk

It is also important to remember that embarking on a drift in blackwater is inherently more risky than a day dive on the reef. Consequently need to know you are a capable diver who has not had a history (ie in the previous few days) of:

With these points in mind, please be aware that (drift) blackwater diving might be unavailable if you’ve ticked any of those boxes, and you might be confined to playing on the sand with a torch until you improve!

It could go one way…

On a good blackwater dive you jump in the water and get entertained by the guide who is composing an ad-hoc symphony of delights for you to take pictures of – you ooh and you ahh, the 75 minutes in the water will come and go in an instant. If you’re really lucky you have also stayed shallow and have loads of air left too.

Your buddy has been patient. The guide has darted between you swapping you out over different subjects and importantly no one has swum under you and exhaled with perfect precision to destroy the most perfect photo you were just about to take. Hopefully you come up relaxed with plenty of battery-life in your torches and exhausted batteries in your strobes.

Returning to the dock with squeals of excitement, disturbing everyone else who is trying to go to sleep, you’ll probably irritate the restaurant staff by insisting on checking your images as soon as you get to the camera room. Eventually you succumb to their polite smiles and go eat and have warm drink.

Today you’re tired… you spent so much time looking at your pictures from last night that you didn’t charge things properly and you spend the morning dives fantasising of having a nap after lunch. Make a mental note to drink lots of water, charge the batteries and then head for a nap when you get back. Oh, and eat too. Get Dive 3 done, some more charging and another nap. Blackwater time comes and you’re ready, oops, except you forgot to vacuum the housing, it’ll be fine, off we go.

You’d think so, and we base our planning on the likelihood that it will be. Unless there’s been a big change in currents/tides/wind, in which case (much to your disappointment) your guide will tell you that we have to move somewhere else because of an external environmental factor.

Even going with the same place/guide/buddy scenario above, there is still a possibility that you’ll have a completely different experience compared to the night before. You or your buddy might get delusions of grandeur relating to night vision and get lost. Maybe you end up in a split current / strong wind where the downline suddenly speeds up and leaves you in the darkness.

The good news in all these rubbish situations is that our boat captains are experienced with all problems and foolishness that can happen on a drift night dive, our team will attempt to anticipate these problems and avoid them before they happen.

Once you hear the welcome putter of one of our 4stroke outboards nearby, maybe the captain is turning the engine on and off to let you know they’re waiting (not revving, that’s an emergency recall if you need to come up quickly due to a big ship (or rock) coming towards you!).

After you’ve done your safety stop you ascend to hear the boatmen calling you over – you’ll feel instantly more relaxed, you’ll probably get back on the boat slightly annoyed that things didn’t go to plan.

Most importantly you are perfectly safe as you did the right thing and came up when you couldn’t see the lights from the downline. If you’re really lucky someone else will also come up early and you can blame it all on them over dinner when you get back.

Come Blackwater Dive with us:

You need to experience both the good and the bad before you can consider yourself on the way to becoming a ‘blackwater diver,’ and the best way to do that in Lembeh is with our amazing experienced team. We don’t guarantee to get it right all the time, but when things go wrong we’ve mostly seen it before and know what to do. If you’re interested in giving it a go with us, please contact us. 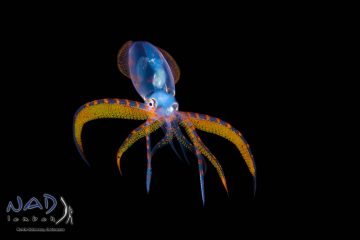 Dropping in to the pitch-black water for the first time can be disorientating at best, terrifying at worst – maybe a gallery of Lembeh blackwater images might tempt you to take the plunge on your Read more…