Blue Ring Octopus have been everywhere form months now, which is unusual to have them around for so long.  The guests have seen them mating, feeding, fighting and now we saw a beautiful specimen with eggs.  Blue Rings doing normal behaviour are a Top 10 Critter for Lembeh, where would you place one with eggs?! 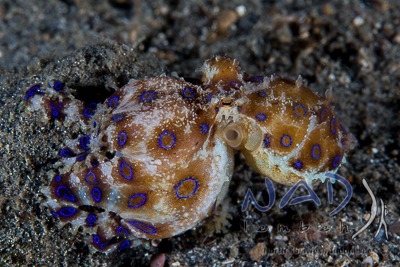 Blue Ringed Octopus have a life cycle of 2 years, however, for this female her time is nearly up as once the eggs hatch she will die.  She will not have eaten for the entire pregnancy (which lasts around a week to 2 weeks). This beautiful girl has moved away from where we found her, hopefully to live out the rest of her days in peace without any photographers! Hopefully in a few months we will start to see her offspring out feeding.
This was a first for me and as such the video is probably not as clinical as it normally would be.  I also left the clip in of the Octopus leaving the bottle without being abused.. Although to be honest I am sure he would not have left the bottle if there were no divers around.