Have sex and die – the octopus way!

When I visited Lembeh in September/October there were flamboyant cuttlefish around in numbers that I have never seen before. On more or less every dive, we saw one or more flamboyants. Blue ring octopus were not as common, but still there was hardly a day when we didn´t see them. This is very much in contrast to the situation now, at least considering adult octopus and cuttlefish. We have seen some, but while still here, they are not nearly close to the densities experienced in September/October. Where did they all go? 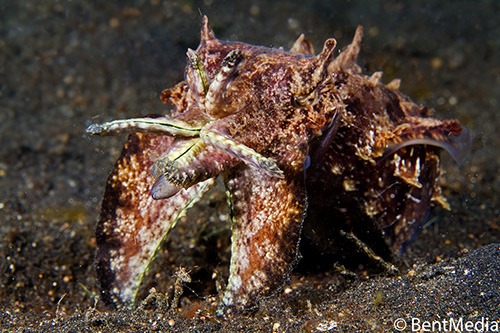 A surviving flamboyant cuttlefish, that probably was out of luck mating in September
Actually, cephalopods, the group that octopus and cuttlefish belong to are quite short-lived. Not only that, they only reproduce once and then die! This pattern of reproduction, where an individual grows for almost all its life, mates and then die, are called semelparity. 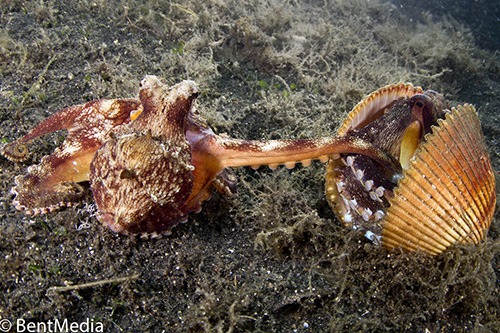 Mating coconut octopus – not something they will do a lot of times!
Other animals continue living after reproduction and produce other litters some time after. Such a strategy, with multiple reproductive events after the onset of maturity, is called iteroparity. 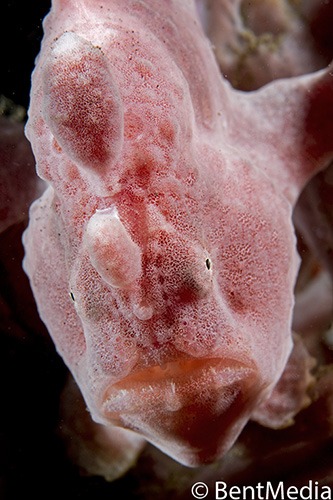 Giant frogfish, an iteroparous species mating several times during its life cycle
The answer is that all life histories, that is the allocation of energy over time, consist of trade offs. Food is seldom unlimited, and if it where, time or developmental rate would limit the options available for an animal. The first ting that needs to be realized is that reproduction, having offspring, is expensive. Experiments have time after time verified that reproducing individuals of a lot of different species die earlier than non-reproducing individuals. That is the first trade off, choosing between a long life or offspring. And having no offspring is a fundamental screw up in nature, as your genes get lost for the future, so choosing long life rather than reproduction is not an option for animals looking for success in life. 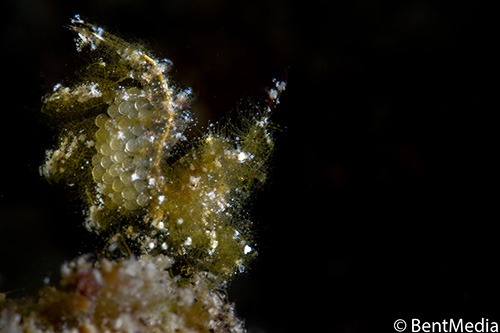 Hairy shrimp carrying eggs
The second trade off is that costs are related to the effort that is put into reproduction. Everything else equal, the more offspring that is produced, the less survival or future growth rate an individual will experience. 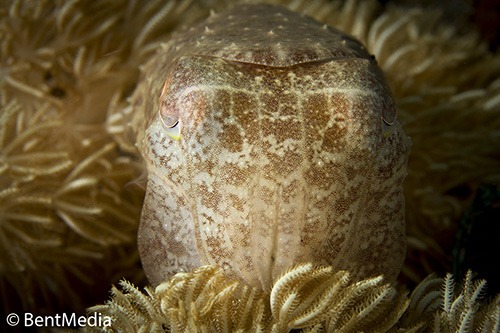 Baby broadclub cuttlefish that never will meet its parents!
The third important trade off is that an individual need to keep significant amounts of energy reserves in order to survive over long time in the future. Up to around 90% of the energy budget might have to be allocated to future survival if that is the goal. Thus, an individual can produce a vastly higher amount of offspring in one reproductive event if no energy is saved for future survival. Thus, if an individual irrespective of reproduction faces quite high mortality rates, it could obviously be advantageous to “go all in”, reproduce with all the effort you can, and save nothing for a very uncertain future. And that is exactly what cephalopods do, invest all they got in one single “big bang” litter instead of saving themselves for another day. 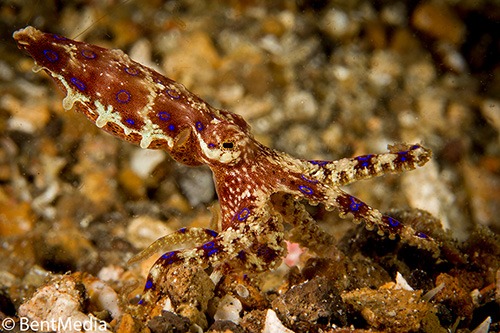 Young blue ring octopus
The cool effect of that here in Lembeh is that there now are quite a number of minute, fully colored flamboyants around. The young flamboyants are really cool, brightly colored and have a lot of attitude. 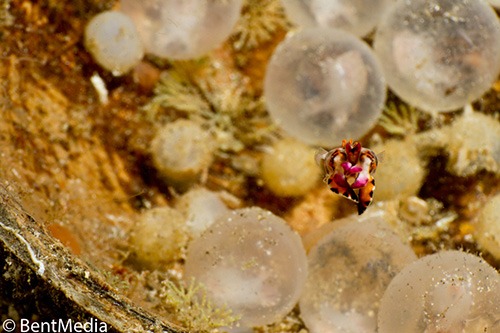