Trying out some new toys.

I could be posting about the Hairy Octopus, billions of Blue Rings, Wonderpus, Bumblebee Shrimps, Harlequins, Ambon Scorpion Fish, Hairy & Green Shrimps etc, but im too busy to go out taking pictures and im so out of practice it will be embarrassing to compare them to Bent‘s Pictures.
In the mean time, Paulus and Joni were able to go out yesterday afternoon and try getting to grips with some different cameras.  They were using a Canon 7D in a Nauticam, a Canon S95 in a Canon Housing, and a Canon 5Dmk3 in an Aquatica.  We headed out on the housereef and within a few minutes they found a mantis with eggs in about 3 m.  So after a while i signaled to them that i would go to the wreck and leave these two highly experienced guides to finish off with the Mantis and then meet up with me at the wrecks. 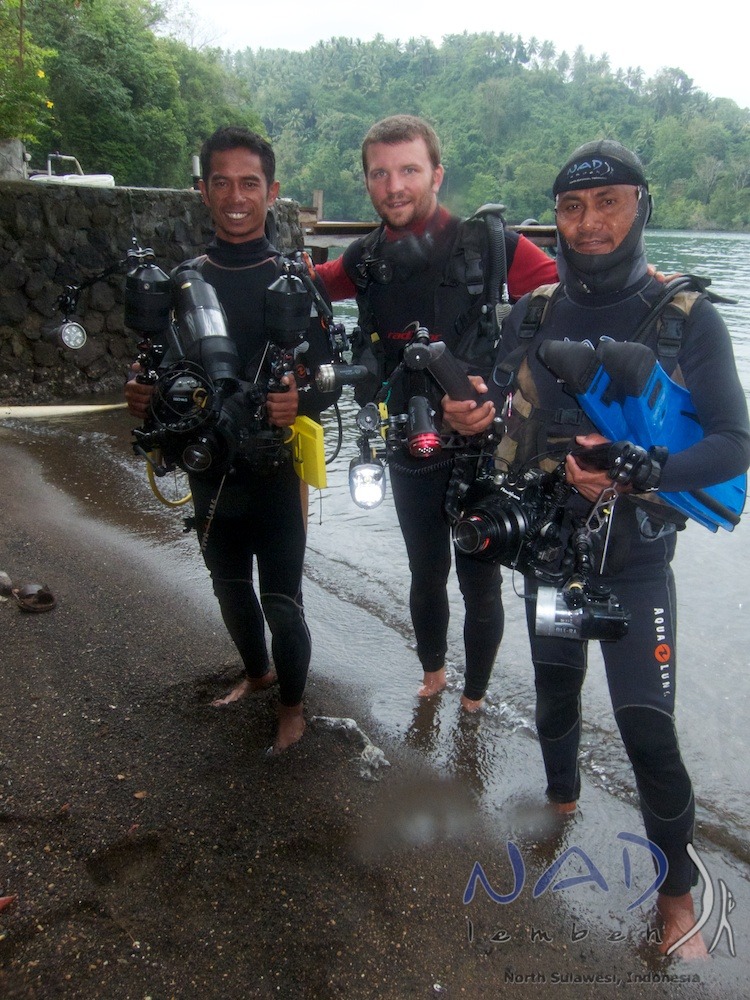 Joni, Simon and Paulus getting ready for a housereef dive.
I happily started taking some snoot pictures at the wreck and got so engrossed I lost track of time, about 30 minutes passed and they still hadn’t arrived.  It turns out the two muppets were playing around with the camera so much they had lost their reference points and swum in the wrong direction (about 200m away!). So for anyone that has got lost during a self guided housereef dive at NAD, you don’t need to feel bad, some of the best guides in Lembeh also get lost when distracted with taking pictures!
Eventually when we met up again, they made some attempts at Lembeh Sea Dragon Shots. Next time they are only going to be allowed to shoot some of the easier things, the hit rate of good shots was a little low.
One thing that I found interesting was that both of them only took about 30 pictures between them, if it wasn’t going to be a good shot they didn’t even bother to pull the trigger.  Many people only shot like that when they had film in their camera.  They also wanted to to the new ‘Shoot 5’ rule that we have been using for the last month, shoot 5 pictures nice and slowly then let someone else get 5 whilst you review.  It makes your pictures a lot better in the end as you are forced to check and avoid silly errors, and stops too much unnecessary flashing of the critters.
Soon the other guides will be finished with their guests and it will be their turn to start the learning process!
Categories: housereefLembehPhotography
Tags: aquaticaHousereefJoniLembehNADNauticamPaulusSea DragonSimonsola

[…] In a move that we think is very proactive and will help their guests who are photographers, our friend Simon over at NAD Lembeh Resort is training his dive staff on how to use a variety of underwater cameras.  Often times guides don’t quite understand what photographers are after when shooting different lenses and what lenses are capable of capturing different sizes of sealife. By getting a variety of cameras into the hands of their top notch guides, they will soon learn the nuances of underwater photographer behaviour!   Here is a link to the NAD blog.  http://nadlembehresort.wordpress.com/2012/10/25/trying-out-some-new-toys/ […]

Blackwater Diving can be challenging. Not only are you drifting a long in the dark looking for exciting things, but many of us like to bring our cameras to be able to capture the weirdness Read more…