Mimicry in a biological sense is the similarity between two species that protect one of them or both. One species, the mimic, evolves to share traits with a noxious species, the model, with the fundamental purpose to send a signal from the mimic to a receiver (most often a predator) so that the receiver cannot correctly identify the mimic. 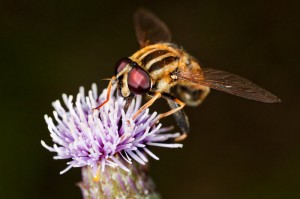 Hoverfly, dangerous only to nectar.

Mimicry comes in a number of different types. In this blog we will cover the common Batesian mimicry, where a prey without much defense tries to emulate a noxious, venomous or poisonous species that predators avoid. As such, the mimic in this case gets a free ride on the investment by the scary species, thus paying nothing for protection by the signal. Another way of putting it is that the true signal sender, to model, will have to be even more horrible in order to make up for the false signals from the deceiving mimic. Above water common examples of Batesian mimicry are black-and-yellow hover flies that use predators fear of wasps to evade predation, or the multicolored milk snakes that resemble the very venomous coral snakes.

Wasp, model for the hover fly.

So does anything soft, moist and edible try to pass of as something gruesome under water, thus being a Batesian mimic? Well, here in Lembeh, at least three examples come to mind. First we have the convict blennies, which are black and white blennies with longitudinal striping.

Me – a mimic? Convict blenny, trying to look like a less edible catfish.

They bear a striking similarity to the venomous  coral catfish. Not only do the two species look very similar, the convict blennies also school in much the same characteristic way the catfish does.

Banded sea snake – a model as venomous as they come!

Mimic octopus, not that hot on being a mimic of anything in this picture! A stone?

Obviously, Batesian mimicry is just one type of mimicry. In coming blogs I will discuss other types of mimicry with different purposes than the mimicry described here. So stay tuned!