A fixed Camera and a happy Baby 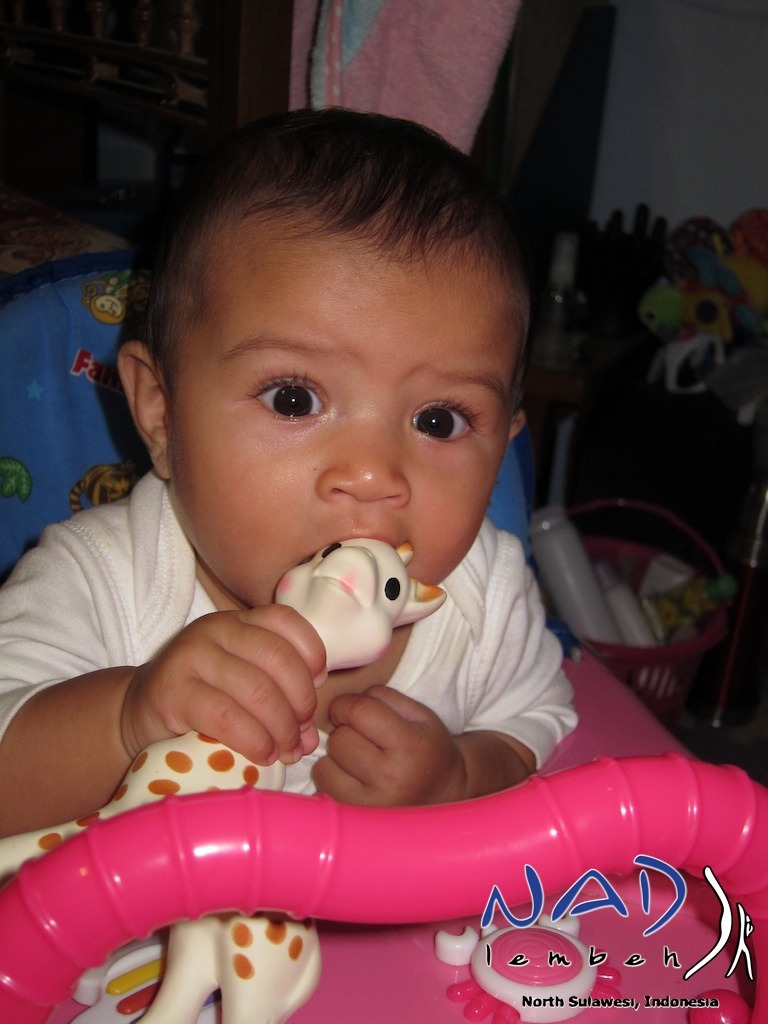 This is Bella – Simon’s Daughter. And Bella is very happy with her new present that came this week per mail:  “Sophie Giraffe”. Thank you very much to Peter de Maagt and Corinne for this little present.
Peter is an Underwater Photographer that regularly publishes is the Dutch diving magazine “Duiken” – and therefore needs his camera equipment to be functional on his trips. When he arrived here at NAD Lembeh coming from Manado the nightmare happened: A problem with the inside of the Nikonos Bulkhead on his Sea&Sea housing. So the strobes did not fire anymore. Luckily Simon could fix the broken strobe connection with some hours of work and a soldering iron and make Peters camera work again … we hope he took home some good shots for future publications!

The season is changing in Lembeh which means the winds are now coming from the South and the water temperature has dropped by a degree or two – nothing to worry about, 26-27 degrees celsius is still toasty for normal people. As a result, a lot of Sargassum sea weed together with over two dozens of Sargassum Frogfish has collected in our little bay a few days ago.

NO GLOVES at NAD – the come back!

Starting in 2014, NAD had already banned the use of dive gloves. In the past year however, we’ve listened to people which we probably shouldn’t have done. Based on some guest feedback, we decided to be more lenient with gloves and trust that not the gloves as such are bad but the person wearing them. As a result, we have now seen that people who talked about being good divers and wearing gloves, would still cause more damage than if they did not wear gloves. Therefore, we will no longer allowing people to dive with gloves at NAD Lembeh.

Upgrades and Renovations around NAD

The beginning of the year is when it’s normally a bit quieter in the Lembeh Strait. However, we’ve been busy during the past few months regardless of the typical “low season” but we still found time for some renovations and upgrades of the resort!