The molluscs is a big and very diverse group consisting of animals as different as a mussel and an octopus! Most colorful and strikingly patterned among the molluscs are the cowries, used as currency in different cultures over time and now prized collector items due to their shining and often brightly coloured and patterned shell. However, what we as divers see, is not the shell itself, but the soft mantle of the animal, wrapped around the shell. The mantle is usually even more beautiful than the shell itself, often bearing a striking similarity to the prey of the cowrie, with tentaclelike protrusions if feeding on coral species. Due to the potent poisons used by cowrie prey as a deterrent to predators, cowries are often adapted to only a single prey species. Thus, being specialists, cowries sometimes has achieved more or less perfect similarities to their prey of choice, making many of them very hard to find, and among the best examples of camouflage. 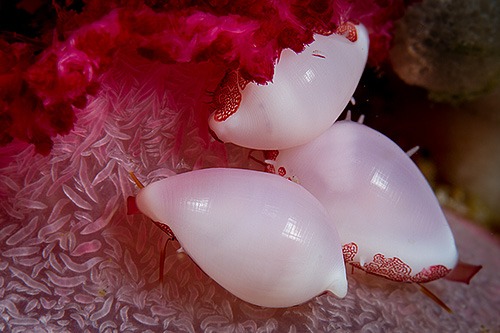 Cowries
There are exceptions to this rule though. The first cowrie of the day was found at 30 meters of water in Angel’s Window. It was the very rare tiger cowrie, which with its striking black and yellow probably is very obvious. Interestingly enough, tiger cowrie finds are rare enough that they merit a blog entry in itself, as can be seen if you go to earlier entries in this series. Tiger cowries feed on a genus of sea fans, which seem to occur in the deeper range of “normal” diving, thus maybe explaining the few observations of this cowrie. 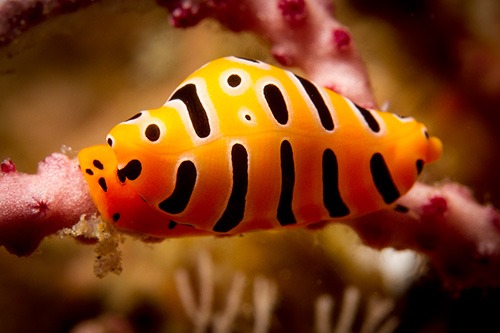 Tiger cowrie
The second cowrie was situated just half a meter or so from the tiger cowrie. This was a wire coral cowrie, which also is a cowrie I have never seen before. I would probably rate the looks of the wire coral cowrie even higher than that of the tiger cowrie, but both are decidedly striking animals. BTW, between the two cowries we found two baby clown frogfish, making this square meter or so the hot spot of Lembeh today.

Wire coral cowrie
Finally, Paulus and Joni found my absolute favorite cowrie, one of the small ovulids living and feeding on soft corals of the genus Dendronephtya. There are several very similar species, and detailed examinations are needed for exact species determination for some of them. Paulus and Joni found not only one, but two of those tiny, and very well camouflaged animals, once again showing that a great guide with good eyes make a lot of difference on muck dives. 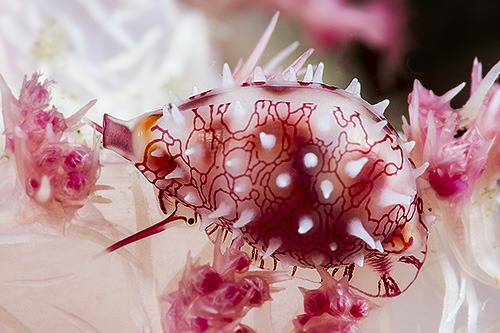 Soft coral cowrie
As a teaser for tomorrow’s entry, this nightdive´s tally of cephalopods was two flamboyant cuttlefish, one coconut octopus, two reef squid, one wunderpus and one bobtail squid. And that was in one hour! The last couple of days and nights have included additional sightings of starry night octopus, several (many!!) blue ringed octopus, mototi octopus, broad-club cuttlefish, pygmy cuttlefish, long-armed octopus, mimic octopus and reef octopus. So, if nothing else steals the headlines, the subject for tomorrow will be the smart invertebrates, the octopus and their closest relatives.
Categories: Uncategorized
Tags: CowrieJoniLembehPaulusSoft CoralTigerwire coral cowrie

Excellent information and pictures, thanks for the effort.
k.