The Aer Bajo dive sites are to me the essence of Lembeh diving. For me an optimal dive plan would include Aer Bajo on at least one dive every day! Sandy, somewhat silty slopes, initially giving the impression of not to many animals around, but always delivering something special. Furthermore, well into the dive, the count of critters almost always go up and on a good day there can be loads of stuff to see. Aer Bajo critters such as mimic and coconut octopus, Ambon scorpionfish and the likes are often found on the slopes down to around 20-something meters, with not much being seen in the shallows.
Aer Bajo dives often start from the boat which is moored in the shallows at around 5 m. Following briefings, after hitting the water, a somewhat uneventful short swim is to be done over the flat sand part before hitting the slopes where the cool stuff is hiding. However, when swimming over the flats, sometimes a false fire urchin or an upside-down jellyfish can be seen. Sometimes this is just what it is and nothing more, but ever so often the urchin or the jellyfish is situated in a depression in the sand. If so, there will almost always be a crab underneath, carrying the jellyfish or the urchin in order to hide from predators, and, if seen, deter predators from eating the crab. 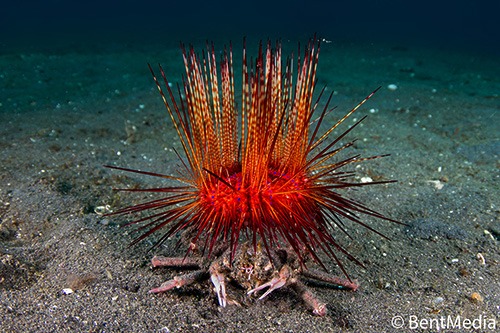 Urchin carrier crab
The urchin carrier crab have hooks on the posterior two pairs of legs with which they hold on to the urchin for life, which also is the reason for the surprisingly few legs one can actually see when the crab walks around. 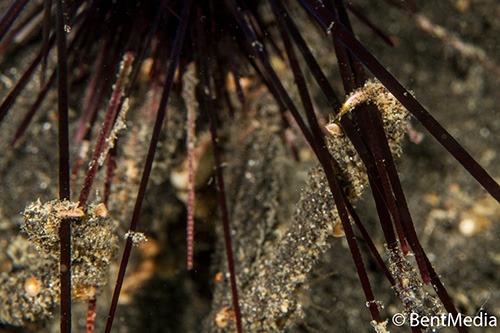 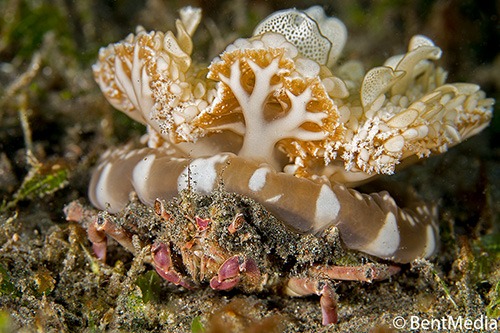 Jellyfish carrier crab
In the literature the general consensus seems to be that the urchins and the jellyfish are fine with being carried by the crabs. This is rather likely to be the case for the upside-down jellies, that feed by photosynthesis from their symbiotic zooxanthellae (the “brown stuff” in the picture above). I find it quite unlikely that the urchin should be fine with being carried around, as the urchin can not feed while being held by the crab. However, the urchins I have seen does not try to escape from the crab, so maybe the crab lets the urchin feed during night, thus keeping the urchin fine and well fed.
So the next time you do Aer Bajo, save some dive time for the shallows. If you stay with one of the carrier crabs for some time, they will loose their shyness and start feeding despite being watched. It is quite cool to se the crab walking around finding organic matter in the sand, while being protected by the urchin or jellyfish on its back. Furthermore, there are a number of different animals that also can be found in the shallows. More about those another day.
Categories: Uncategorized

you have some beautiful shots. This is a very interesting article. Thank you for sharing it

The house reef is by no means a premier divesite, but for a lazy shallow dive it can tick off almost all the anemone fish