Invertebrates are in general stupid animals. Mussels, snails, and most other members of the mollusk group would certainly score pretty low on any scale of creative brightness, but their life style on the other hand does not require a brilliant mind. The only exception is the cephalopods, translated from greek as headfoot, such as the squid, cuttlefish and octopus. The cephalopods are highly adaptable animals, making creative use of their environment when hiding and hunting prey. Cephalopods are bright animals, with some of the octopus being significantly smarter than even some vertebrates. An octopus ability to learn mazes is in the range of that of a rat (which is good at learning mazes!), and octopus learn to open glass jars with screw on lids very quickly and do remember how for a long time. One of the octopus, the coconut octopus, is the only invertebrate currently being classed as being able to use tools. Coconut octopus live on sand flats and would be very easy prey for medium-sized and larger fish when the octopus is up and moving around in search of prey. Coconut octopus solve this problem by placing different objects such as empty shells or coconut husks on certain places in their territory, and use those objects to hide in when in danger. 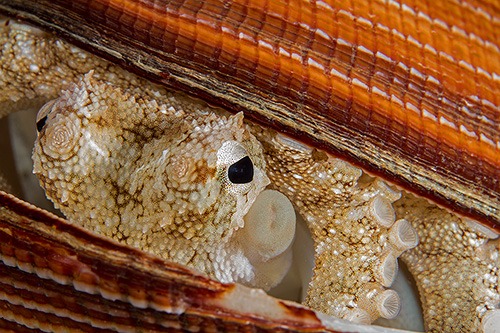 Coconut octopus hiding in shell
During the week I have been here in Lembeh, we have during just a couple of days seen flamboyant cuttlefish, coconut octopus, reef squid, broadclub cuttlefish, pygmy cuttlefish, wunderpus, bobtail squid, starry night octopus, blue ringed octopus (at least 5!), mototi octopus, algae octopus, mimic octopus as well as reef octopus. It seems that we only got one left on the list now, the hairy octopus, which seems to be very seasonal, and not here now. (See update here.) 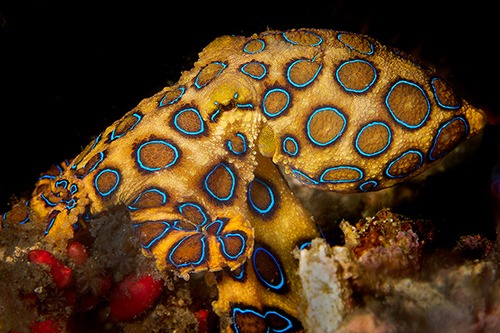 Blue-ring octopus
On proper coral reefs only a couple of cephalopods can be found. The much larger diversity of cephalopods here in Lembeh is due to the mosaic of habitats that can be found. Mototi and blue-ringed octopus, as an example, prefer to live in rubble.  Mimic octopus live in sand, while bobtails and flamboyants live in siltier conditions. Wunderpus prefers a mixture of sand and rubble, while most squid and cuttlefish, being more or less living in the water column, are found over different bottoms. 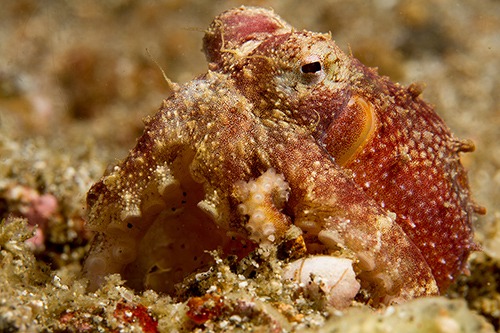 Mototi octopus
More or less everyone seems to be well aware of the powerful toxin used as a defense by blue-ringed octopus. Less known is that most, if not all, octopus have toxins in their saliva that are injected when the octopus bites something or someone. Mototi seem to be in the range of the blue-ringed, while most other octopus seem to be less dangerous, but great care should be taken not to be bitten by any octopus. Some of the cuttlefish, such as the flamboyant cuttlefish are poisonous enough to quickly kill any predator brave enough to ignore the flamboyants flashing of warning colours, deterring most predators from even trying. 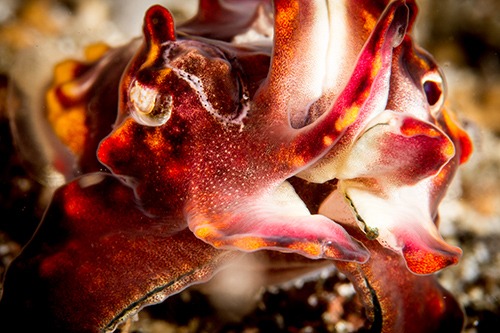 Flamboyant cuttlefish
Most cephalopods have the ability to change colour and skin texture very rapidly, thus being able to melt in in the environment while moving around. The many pygmy cuttlefish we see here now are prime examples of that feature. They look like sponges, sand, coral and even crinoids. 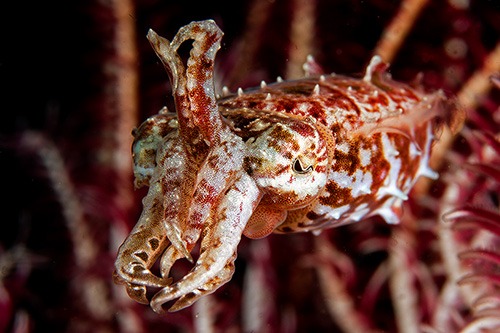 Pygmy cuttlefish in crinoid
Juveniles of broadclub cuttlefish like to hang around soft corals and change colour and to some extent skin structure to resemble the coral colony. 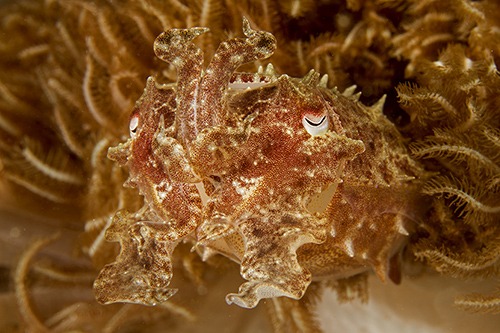 Broadclub cuttlefish
No molluscs tomorrow, the nudis will have to wait a day or two. It is highly likely that the sea horses and their relaitves will be the subject for tomorrows entry, but, as always, something could get in the way during the mornings dives.
Categories: Uncategorized
Tags: Blue Ringed OctopusBobtailFlamboyantLembehMimicmosiacMototiOcotopusPoison