Deadliest snakes in the world?

I posted the following picture of a yellow lipped sea krait, Laticauda colubrina, on a couple of web sites after my last visit in Lembeh. 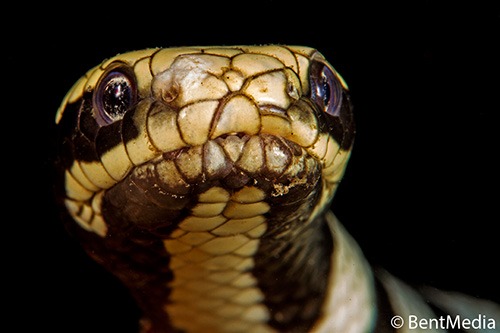 Yellow lipped sea krait
Among comments, several was so sure of the extreme danger I was subject to while taking the picture that they felt it worthwhile to actually write and advice me not to get that close to such a deadly creature, or the second most deadly snake in the world as one comment described it. That is of course very considerate, and I appreciate that to me unknown people actually worry about my well being, but in this case it is not really warranted. In my day job I sometimes handle snakes, and while I am pretty careful handling most terrestrial venomous snakes such as pit vipers, I am pretty relaxed about the underwater snakes, or at least sea kraits. 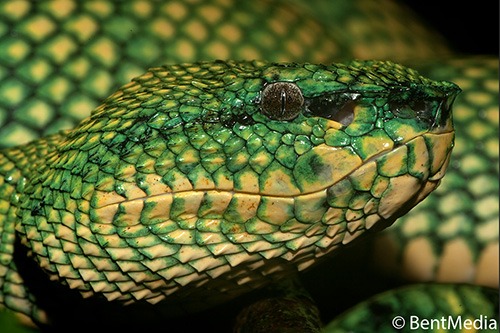 Wagler´s pit viper. While rarely deadly, it is seriously problematic to be bitten by. Picture not from Lembeh
That said, most marine snakes have extremely potent venom. So am I an idiot without any consideration of danger (think James Bond meets Chuck Norris), or is there more to the risk of being close to a snake than just the potency of the venom per se? 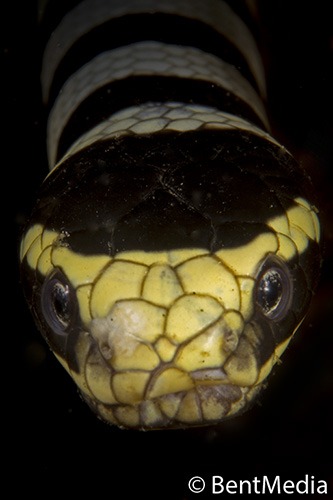 Yellow lipped krait
Well, first of all, humans are extremely bad at doing rational risk evaluations. One relevant example in the context of diving is of course the risk of being killed by a shark, which is many orders of magnitude less than other risks, such as the risk of being killed in a traffic accident, we accept daily. Even toasters are on a global level far more dangerous than sharks, but I have yet to meet a person that questions my sanity when I put toast in a toaster. Not so when I give talks on marine ecology, when I show pictures with sharks, the audience more or less always are pretty certain that a miracle saved me from being torn to pieces by the shark, even if it is a picture of white tip reef shark, being below hamsters or rats on my list of dangerous creatures! 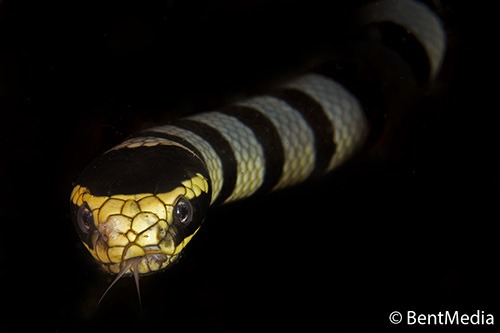 Yellow lipped krait
Still there is the issue of the potency of the marine snake venom? How should that enter into a rational risk evaluation? The risk of actually being hurt, or even dying, of a particular snake´s bite is the product of a number of factors. Included in those factors are the risk of meeting the snake, risk of being bitten once having met the snake, risk of the bite actually penetrating the skin, the risk of being envenomed once being penetrated by the fangs, the amount of venom being transferred once being envenomed, the potency of the venom and the size and health status of the person being bit. So how does the banded sea kraits, such as the yellow lipped krait pictured here, score on such a calculation. 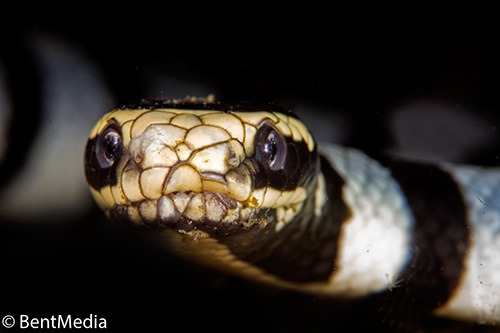 Yellow lipped krait
The risk of meeting the yellow lipped sea krait (or chance, from my perspective) is quite high. I see them approximately every 25th dive in Southeast Asia, so if one does a fair amount of diving, one will definitely run into the snakes. The risk of being bitten once having met the snake is extraordinarily low on the other hand. The only information I have on bites by the sea kraits is that fishermen entangling the snakes from nets have sometimes been bitten. Also there is some anecdotal evidence that the snakes can be aggressive if they feel that their way to the surface is blocked (they breathe air as all other snakes). Sea kraits have rather small teeth, so given that most divers wear wet suits, a bite would rarely if ever penetrate the suit. I have no specific information on the rate of   envenomation once being penetrated, but many snakes do not use their costly venom very often in defensive actions. Also, given that venom is transferred, there seems to be quite some variation in the amount injected. 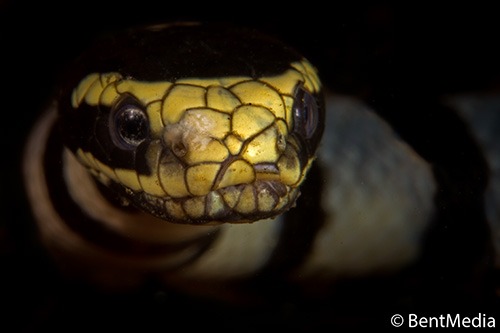 Yellow lipped krait
The potency of the venom in general, however, is very high for sea snakes. Finally, I am big and quite healthy. So, in conclusion, for yours truly, the combined risk of being killed by a banded sea krait seems to be quite low. Of course your calculation might differ markedly, so do not take this blogg entry as anything else than an example of my very own way of accounting for risk. 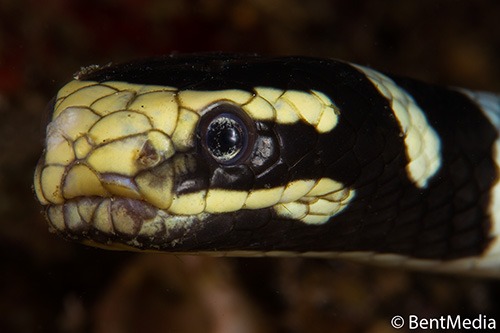 Yellow lipped sea snake
It should also be emphasised that there are many other sea snakes that scores much higher on the aggressiveness and tooth size factor above. At least one of those looks very much as the banded krait, so mistakes in identification can be made even by very experienced herpetologists. So even if the kraits are very docile, it might overall be good advice for most people to be a little bit careful around sea snakes. 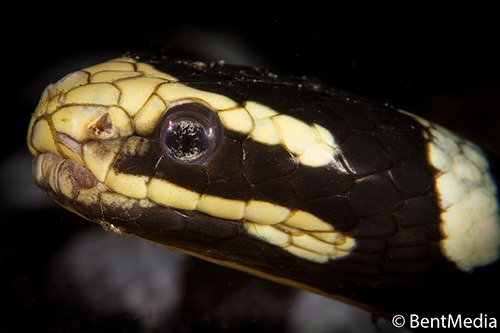 Love this post. I’ve been diving with tons of sharks, and as many as 6 sea kraits on one dive. Never have I been the least bit afraid. The best statement of the whole post is “humans are bad at making rational risk calculations.” By the way, lembeh is my next dive destination.

Thanks for putting in the effort to write these blog posts, very interesting, and great pictures
k.

Thanks. Matt, with the exception of a week in the Red Sea, Lembeh is my next destination as well.