Fire urchins and their inhabitants

Being an animal is being filled with protein and fat! That is probably the scariest fact small animals have to face. Protein and fat is on the whole extremely uncommon in nature. Compared to the ubiquitous carbohydrates, which plants just require some sun and some fancy chemistry to create, protein and fat is really hard to come by. Carbohydrates are also readily available to any one interested (if you don’t believe me, take a look out of your window and you will se all the green stuff we call plants, all consisting mainly of carbohydrates). The flip side of the availability of carbohydrates is that they are terribly hard to digest, and once digested, rarely in themselves meets the dietary requirements of higher animals. Protein and fat, on the other hand, is easily digested, and, once digested, more or less meets all requirements animals have for different substances to build parts of their body as well as fuel the whole system. As an inevitable consequence, protein and fat will be very rare, and once in place, will be protected by it´s owner a lot, as death is the most likely effect of loosing substantial amounts of a protein and fat investment.
The inequality between the availability and quality of different food substances is one of the major drivers of evolution. After all, animals, consisting of sought after ingredients, that get eaten will by definition have lost out in the evolutionary game, from which there is no second chance. Obviously this will put great pressure on small, slow, easily devoured prey to do something about the risk they face. Enter one of the most painful animals I have ever met, the fire urchin! 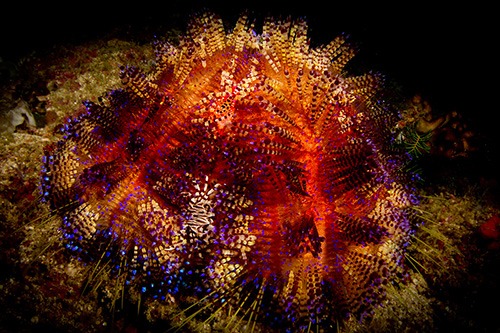 Fire urchin
Fire urchins are essentially slow, ball shaped meals of protein and fat in a package that is easy to catch. Obviously, evolution had to do something about this, or fire urchins would have been extinct a couple of minutes after they evolved.  Fire urchins did not get their name in a random draw of cool names for urchins. As everyone that have had contact with them know, a sting will lead to a burning sensation, that will continue for quite some time. There is no doubt that getting stung will be a stern warning to never ever touch anything remotely similar to a fire urchin again. Fire urchins have venomous tips on their many spines, and the spines are quite brittle, breaking of when embedded in a clumsy victim, prolonging the pain to several hours. However, unlike it´s most venomous relative, the flower urchin, stings by a fire urchin is rather highly uncomfortable more than an imminent danger. 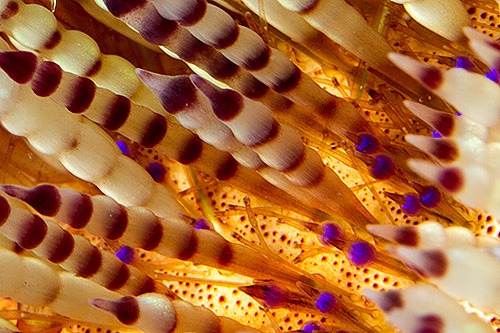 Fire urchin spines
So is this entry all about fire urchins? No, essentially it is all leading up to some the animals enjoying the defenses of the fire urchins. A number of crustaceans live all their adult life on fire urchins. First of all, and in many ways the most characteristic of those, are the zebra crabs. The striking dark brown and white colouring of the zebra crab and the weird and unusual shape of the carapace makes it really easy to recognize it. Zebra crabs also occur on false fire urchins and on flower urchins. 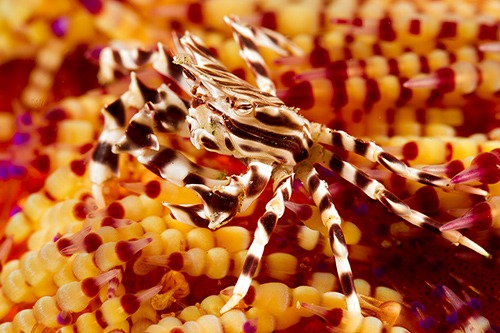 Zebra crab
The fire urchin squat lobster on the other hand is much harder to find. It ´s colours blend in very well with those of their host. The squat lobsters also tend to perch low on the urchin and can easily be overlooked. 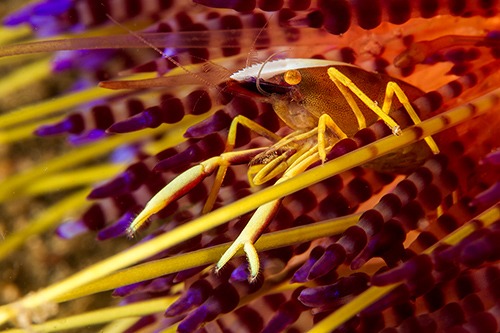 Fire urchin squat lobster
Probably the most sought after of the crustaceans living on fire urchins are the Coleman shrimp. Coleman shrimp will almost always be found in pairs. They clear the spines from a small area high on the urchin where the pair can be found. Coleman shrimp feed on the soft tube feet and tentacles of the sea urchin, which does not seem to be severely harmed. Being very confident of the protection the shrimp gain from the venomous spines of the urchin, Coleman shrimp are excellent and very attractive subjects for photographers. Take care, though, not to get too close to the urchin, as fire urchins move pretty quickly being an urchin, which could have painful effects it you are to concentrated on getting the perfect picture of the colourful pair of shrimps! 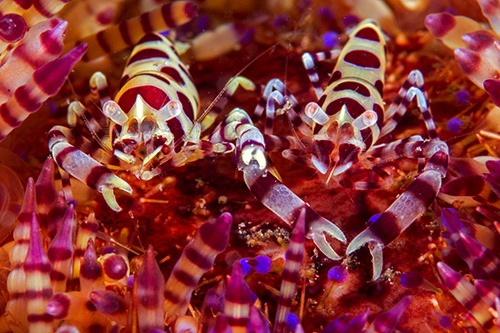