Well, as Lembeh must be the frogfish capital of the world, and frogfish are some of my favourite critters, I think that frogfish actually merits another blog entry. So here it is. 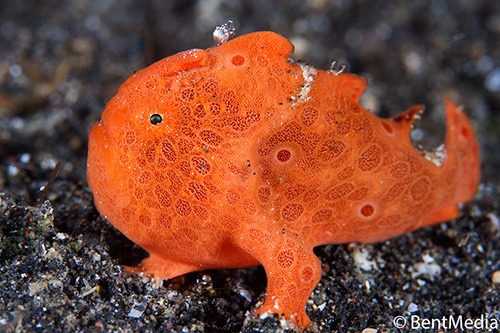 Juvenile painted frogfish
Frogfish are probably most known for their built in bait, an illicium or “fishing rod” that is topped with the esca, the worm- or shrimplike lure it self. The illicium and esca are formed from the foremost rays of the anterior dorsal fin, and can be moved in different directions in front of the mouth when prey comes close enough. 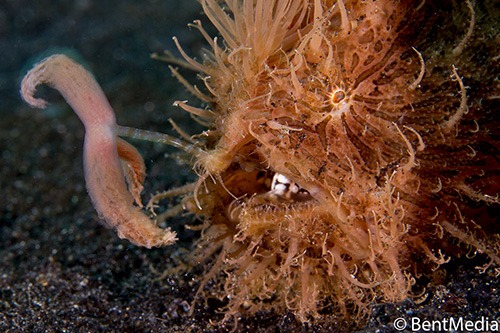 Striated frogfish using its lure
Frogfish belong to the family Antennariidae in the order Lophiiformes, which among others also include the supercool deep water anglerfish with lures that are shining with light. With a few exceptions, the most notable being the Sargasso frogfish, frogfish are mostly shallow water fish, living among rubble, sea weed, coral heads and other underwater structures that can aid the frogfish in hiding their outline from prey and predators. 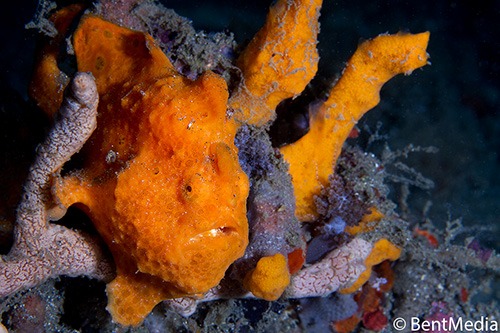 Orange painted frogfish in orange sponge
In Lembeh strait a number of species are found. I have seen eight or nine species in Lembeh, but there are probably one or two more around. 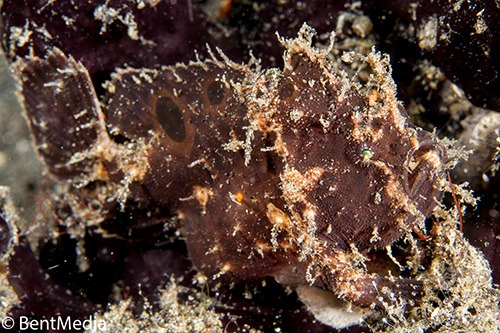 Scarlet frogfish. I think.
Frogfish are notoriously hard to determine to species. Many species come in different colors, so color is at best a weak clue to what they are. Colors seem to change with background, making camouflage excellent, but on the other hand not helping very much in species determination. 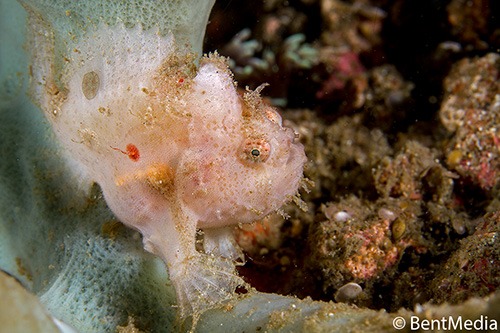 Probably a spotfin frogfish
A combination of habitat, body shape, and, maybe most important, characteristics of the lure can most often be used to at last narrow it down to a couple of likely names. A few, however, such as the hairy frogfish with it´s wormlike lure and the warty frogfish with it´s warty exterior are very characteristic and often easy to name. Others, such as the hispid, the painted and the giant (also called Commersons) frogfish are not to hard to determine if the lure is visible. 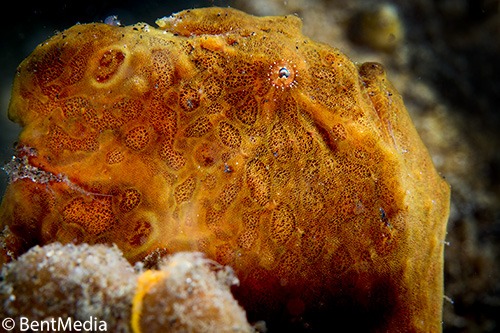 Probably giant frogfish
Then there are a number of frogfish with lures that are hard to see and quite similar markings that I find pretty hard to determine to species underwater. 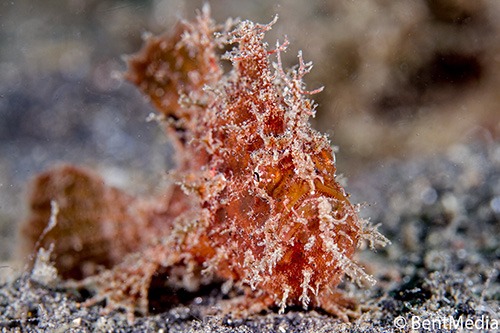 Well, it is a frogfish! More than that, I have no idea.
And finally, Lembeh is home to at least one undescribed species, which has not been named by scientists yet. 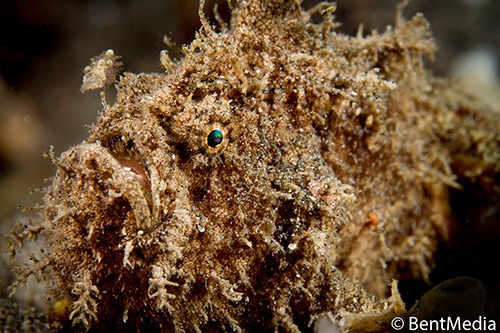 An undescribed frogfish. Isn´t that cool!
The lure of the frogfish indicates that frogfish are specializing on fish as prey. With a few exceptions, fish is exactly what frogfish eat. When a small fish comes close to the frogfish, the lure is waved in an enticing way in front of the mouth of the frogfish. The prey fish will often be conned into believing that it is the luckiest day in its life, which most often is the last feeling the prey fish will have. When the prey comes close enough, the frogfish extends its enormous mouth, inhaling a lot of water and a small, and highly likely very surprised, fish. The mouth movement of the frogfish is so quick that scientists have problems explaining how that speed is even possible. 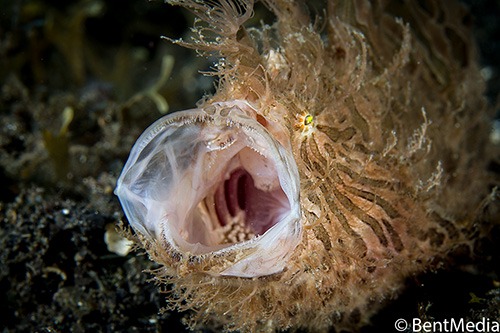 Large volume of striated frogfish mouth
The teeth of frogfish are very pointed and directed backwards towards the interior of the mouth. Thus, anything caught by a frogfish will have a really hard time escaping, while the direction of the teeth will allow the frogfish to move the prey inside the mouth. Frogfish are extremely elastic, being able to swallow prey as large as themselves. 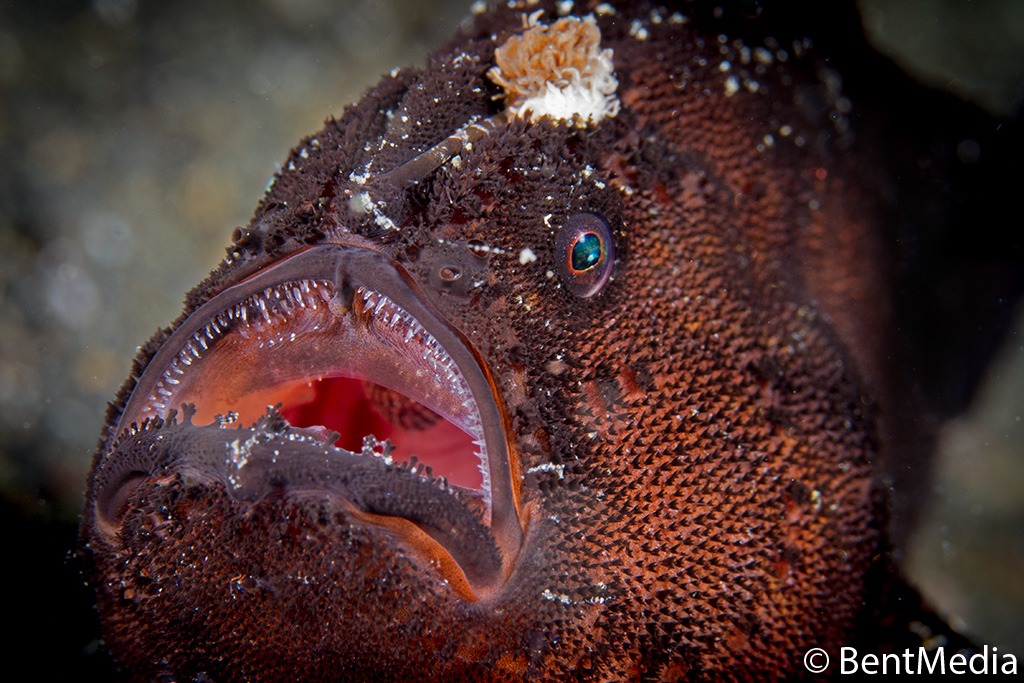 Teeth of hispid frogfish
Frogfish have three ways of moving. First, like most fish, they can swim through the water column using their caudal fin. They can also use a water jet by expelling water through the small gill openings behind the pelvic fins. Finally, frogfish can more or less gallop over sandy bottoms, in a rather ungraceful running motion resembling what a cross between a sea lion, a football and a horse would look like in full speed. 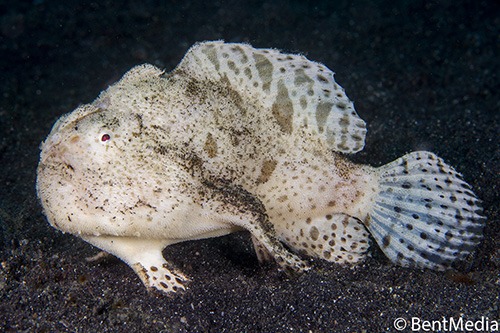 Speeding striated frogfish
So, now I am of running an ecology/photo course in the Red sea. Those of you that follow this series will probably have the next entry available in a couple of weeks. 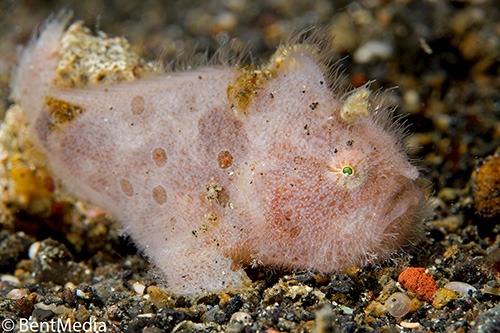 Love your blogs Bent! Great information that engages your audience – I hope you do many more 🙂