Mutualisms are close, long-term relationships between two species where both species benefit from the relationship. Mutualisms can, just as commensalisms, be obligate or facultative. They can also be endosymbiotic, that is one species living inside another, or ectosymbiotic, which is one species living on the surface of the other.
One relationship that during a long time has been viewed as a proper endosymbiotic mutualism is that of corals and their algal symbionts, the zooxanthellae. Zooxanthellae are small, unicellular algae that after being ingested by reef building corals are transferred to cells just under the surface of the coral. The zooxanthellae then translocates photosynthetic products to the coral, while the coral in turn provides the zooxanthellae with inorganic nutrients. 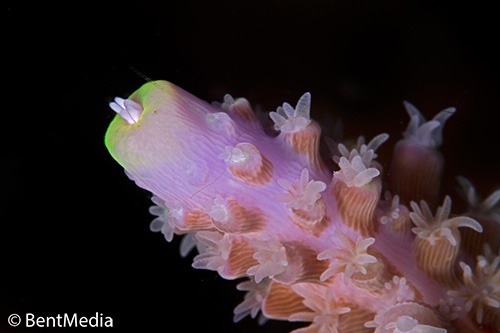 Hard coral with zooxanthellae showing
This relationship has been widely studied during the last couple of decades due to the decline of coral reefs over large areas. There is now some discussion of the exact form of the relationship between coral and algae, as the algae seem to be have a much slower reproduction rate inside corals than outside on their own, corals ingest a fair number of the zooxanthellae and the coral can expel the zooxanthellae during periods of distress. The later is called bleaching and is a subject of much concern, believed to worsen in years to come, when surface temperatures in the oceans rise, and maybe even more problematic, when the acidity of oceans rise in response to the increase in atmospheric CO2-levels. Currently, you are not likely to see much bleaching in Lembeh, but there are single colonies here and there showing the white skeleton of the coral. 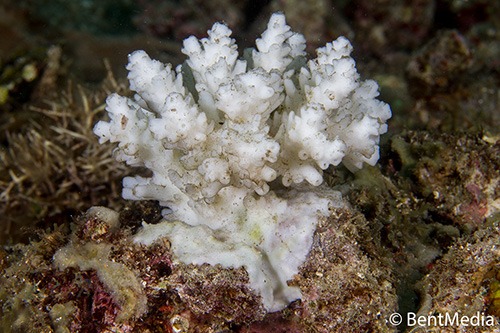 Bleached coral
Many other animals use zooxanthellae to cover parts of their energy requirements. Some sponges, giant clams, anemones, jellyfish and nudibranchs have this symbiosis. 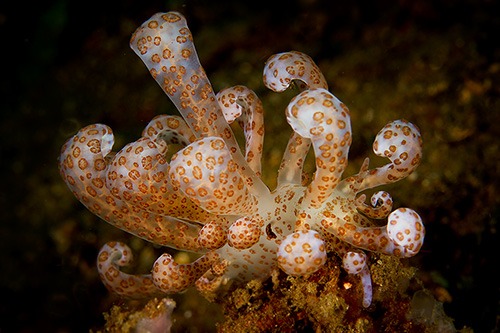 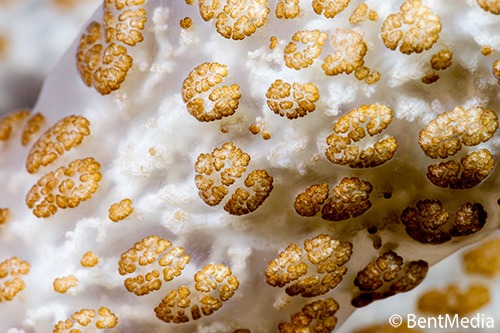 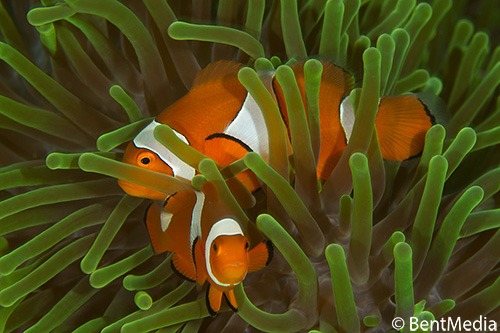 False clownfish in anemone
So are there no classic nice mutualistic stories left to tell? Well, some still seem to meet the requirements. The small crabs that sit in branching corals actually do benefit the coral, cleaner fish actually are very important for reef fish, and, finally, the partnership between gobies and burrowing shrimp seems to be essential to both goby and shrimp. The shrimp are blind, or at least do not see very well, while the goby has nowhere to hide on the sandy areas they both reside. In a remarkable partnership, the goby keeps watch over the surroundings while the shrimp tends to their common burrow. When outside the burrow, using its very long antennae, the shrimp always has direct contact with the posterior dorsal fin of the goby. The goby use different vibration frequencies of the fin to inform the shrimp about the level of danger and the shrimp responds accordingly. When there is no danger, the shrimp works quite far from the burrow, when there is a medium risk work is performed in the burrow opening, and when it gets too scary, the shrimp bolts into the burrow; at night, when the eyesight of the goby is of no use, the goby enters the burrow and the shrimp closes for the night from the inside by using small shells and pebbles, leaving both safe for the night. 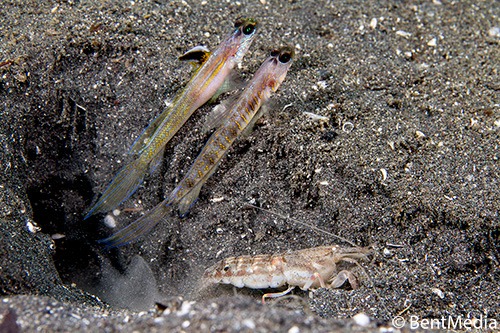