Commensalism requires one animal, the host, to accept the presence of another, without receiving anything for it, which, in itself, is not very complicated from an evolutionary point of view. Mutualism requires one animal to give advantages to another while at the same time receiving benefits from the other. At first sight this probably seems as easy to understand as commensalism. However, evolution will favor animals receiving more for less, thus probably putting a strain on most mutualisms. Mutualisms could probably be understood as standoffs, where both parties try to minimize their cost and maximize their benefits. Parasitism, on the other hand, has interesting complications. Parasites receive benefits from another animal, while the other animal, the host, incurs a cost. Thus, the host will want to get rid of the parasite. The parasite, while wanting to get as much benefit as possible from the host, does have to be a prudent consumer. If the parasite is to costly for the host, the host will die, leaving the parasite in a really problematic situation, as new hosts  are often hard to find.
So which are the parasites we can see here in Lembeh? First of all, many of the crustaceans living on echinoderms would be parasitic to some extent. Coleman shrimp, for example, live exclusively on fire urchins and feed on the tube feet of the urchin. Even if urchins are good at regenerating lost body parts, there will at least be an energetic cost to the removal and regeneration of the tube feet caused by the feeding of the Coleman shrimp. 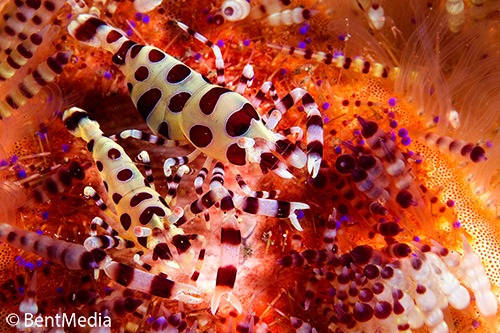 Coleman shrimp on fire urchin
Another crustacean parasite, more common than the Coleman shrimp,  that divers looking for gobies on wire corals will see a lot, is the copepods that attach to the wire coral gobies. These copepods look like normal crustacean larvae when pelagic, but when they settle on a goby, the copepods sink their mouthparts into the skin of the goby and changes morphology dramatically. The resulting individual will be composed of the mouth stuck in the goby, a digestive system converting fluids from the goby to new eggs, and the egg sacks looking like corkscrew curls. 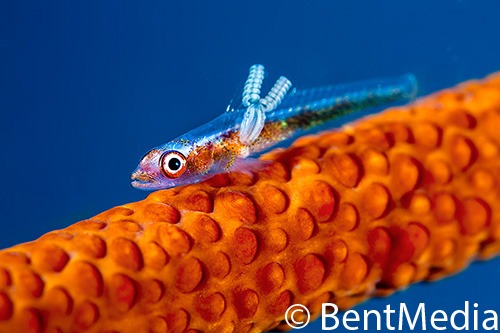 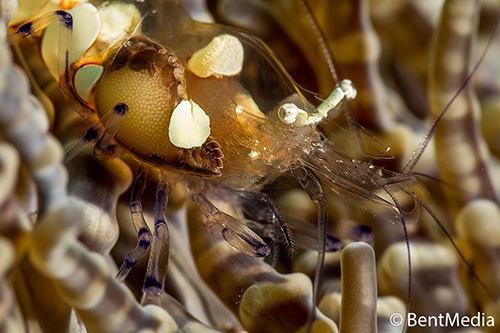 Crustacean parasite with eggs inside the gill covers of a shrimp
One of my favorite parasites is the blue shells that parasitize Linckia sea stars. Linckia sea stars sometimes reproduce asexually by releasing an arm or two, letting the arm regenerate to a new sea star. A single arm, however, has a significantly greater risk of dying than a whole sea star. The shell takes control over this process and shuts down the release of arms, minimizing the risk that the shell gets caught on a single arm. 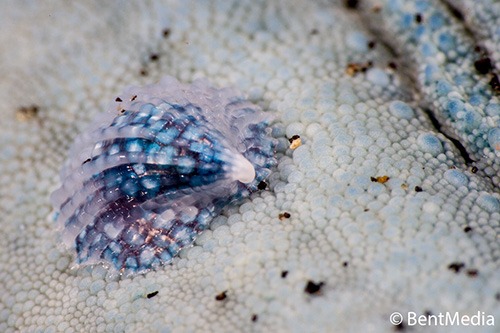 Shell on Linckia
Finally, my absolute favorite among animals, is the so called tongue eating parasite, Cymothoa exigua, that lives in a number of fishes mouths, apparently eating the tongue of the host, replacing the function of the tongue. In Lembeh they are commonly seen in the mouths of anemone fish, especially the saddlebacks residing on sand bottoms in large carpet anemones. 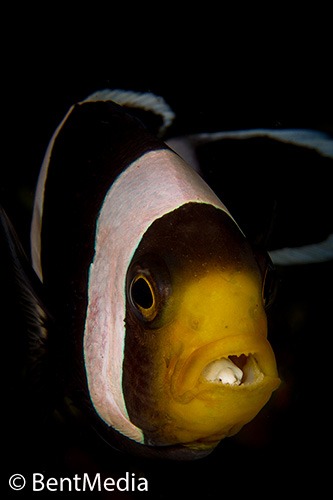 Cymothoa sp. in saddleback anemone fish
It should, however, be emphasized that most of the current information on the Cymothoa is purely anecdotal and much more research will be needed before the interaction between fish and alleged tongue eater is understood. 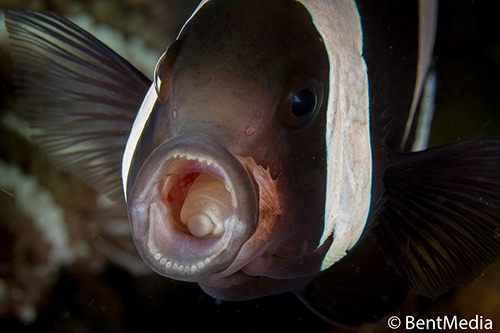 […] up to Bent’s enthusiasm for all things parasitic, i saw a parasitic copepod on a goby today at Nudi Falls, this one was on a soft coral so was in a […]