Seahorses and their relatives.

Lembeh is a very good place for seahorse hunting. Not only does Lembeh have several “proper” seahorses, which is medium-sized fish, looking like a seahorse should look like but also at least three pygmy seahorses, a number of pipefish and the almost iconic Lembeh sea dragon as well as their relatives, ornate ghost pipefish and the sea moths. 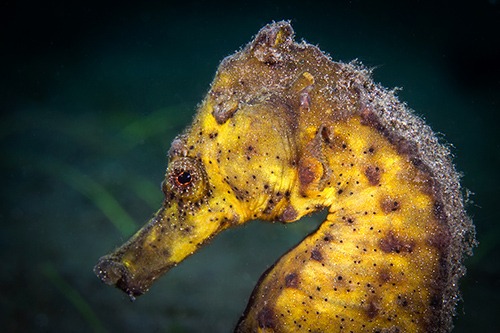 Common seahorse
The coolest and maybe best known feature of the seahorses and pipefish is that the males takes care of the eggs. Why is this such a big deal? Well, as we define the two sexes, males produce tiny mobile sex cells called sperm numbering gazillions, while females make a few energetically expensive, immobile sex cells called eggs. Thus, males can get to father a lot of offspring by getting their sperm placed in contact with eggs, while females are limited to much fewer offspring. Of course the mean number of offspring for the two sexes will be the same, indicating that some males have great success, and others none, while females have much less variance in their number of offspring than males. Also, in most cases, as females have a large investment in each mating, females may often be more motivated to invest in offspring. 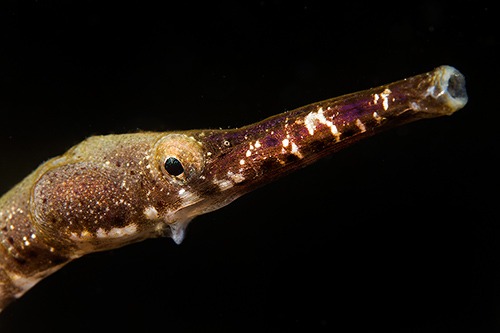 Stick pipefish
Not so among seahorses and pipefish. Seahorse and pipefish males, for some reason, are the caretakers of the eggs during development. In seahorses eggs are transferred to a pouch on the males abdomen and the male there fertilizes the eggs. Eggs are kept in the pouch until they hatch and the small seahorses, that look like miniature versions of the adults, are expelled by the male by contractions of the pouch. Pipefish on the other hand, do not have a pouch and “glue” their eggs to either their abdomen or to the base of the tail. As most seahorses and pipefish are monogamous, it does make sense for the pair to let the male take care of the eggs and juveniles, as the female then can invest all surplus food in a new batch of eggs. As far as I know, little is known about the sex roles of the pygmy seahorses, but researchers are currently working on both their ecology and their systematics. 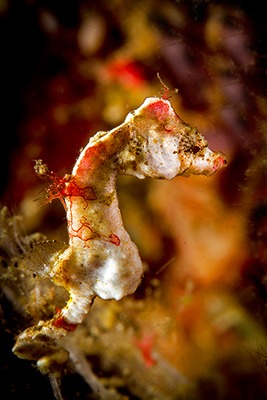 Pontohi pygmy seahorse
Ghost pipefish females in contrast take care of the eggs. The eggs are held between the pelvic fins of the female and held until they hatch. The male, often much smaller than the female, hangs around and waits for the eggs to hatch. 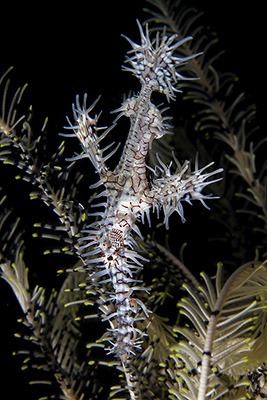 Ornate ghost pipefish
Quite common here in the strait are the sea moths, close relatives to the seahorses. They are almost always found in pairs, with the more distinctly coloured male leading their walk around their territory in search of food. 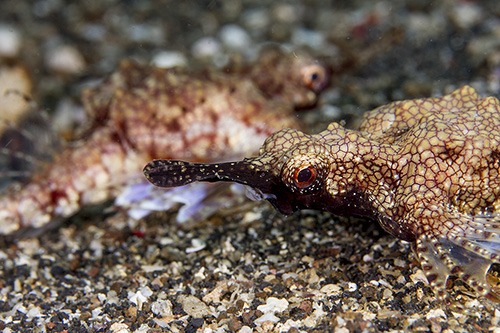 Sea moth
Finally, it is interesting that there still are both a number of known but scientifically undescribed species, and news species that are found on a continuous basis. In the north Sulawesi region the Pontohi seahorse and the Lembeh seadragon have been found during recent years. It is highly likely that more species will be found here in the years to come. In fact, the first of the pygmy seahorses were found not too long ago by a sea fan researcher, that took a sample of a particular sea fan into his laboratory, and there much to his surprise, saw the small, pink Bargibanti seahorses swim around the fan. 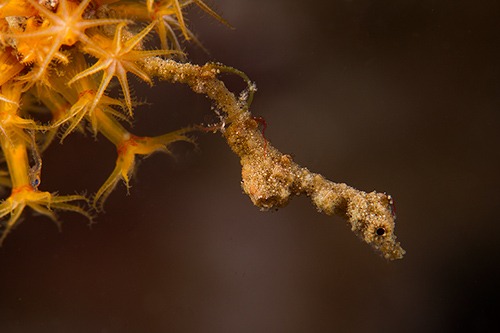