On my day job part of my time is used to teach ecology for undergraduates in biology. Maybe not such a surprise, many of the best examples of interactions between species that I use in my teaching come from marine ecosystems. This is especially true when dealing with symbiosis theory.
Symbiosis means “together living”, and describes animals or plants living together with a tight relationship with each other. It is reserved for animals or plants of different species, but the exact definition is under some discussion. I will use it in its general sense, including obligate (the different species need each other) and facultative (at least one species affects the other species, but the interaction is not essential for either). Used in this sense, symbiosis includes commensalism, mutualism and parasitism. Today´s entry will be on the least exciting of the three, commensalistic interactions. 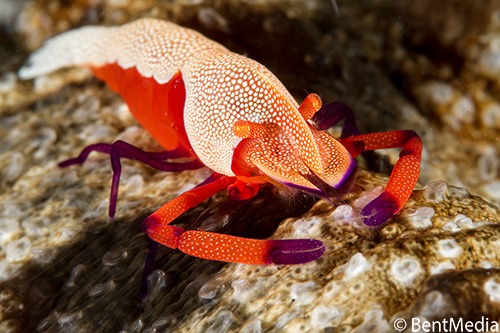 Emperor shrimp feed on the bypassing substrate and do not harm their sea cucumber host, gaining protection by living on the unpalatable sea cucumber.
Commensalism describes the relationship between two organisms where one organism benefits without affecting the other. Many such examples are found in marine environments. One likely example is the small porcelain crabs residing on soft corals. The porcelain crabs get a perch to sit on and protection among the arms of the soft coral, while the soft coral is unaffected. 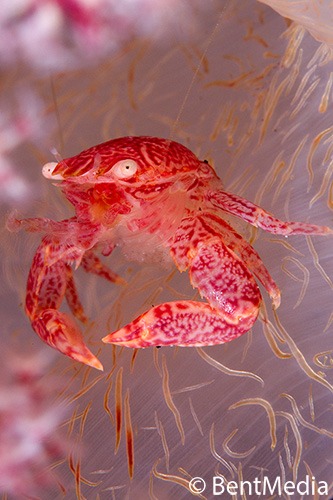 Porcelain crab on Dendronephtya soft coral
Another example would be the gobies that live on many other animals in the sea, often changing colour to closely resembling their host. It is likely that the host in most circumstances are rather unaffected by the gobies seeking shelter. 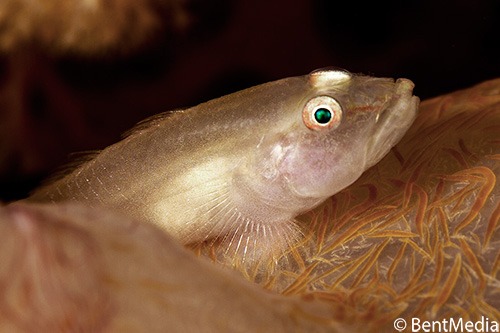 Commensal goby
The gobies and the porcelain crabs exemplify commensalistic interactions where one species lives on the other species, which is a true symbiosis. They are probably also more or less obligate, as predators quickly would kill both gobies and porcelain crabs without the shelter of the hosts . Commensalism doesn´t have to include symbiosis. This was clear when we were in a slight current on Hairball, watching a box crab rip a smaller crab to pieces. Box crabs are messy feeders, so a lot of the bits and pieces of the crab were swept down current out of reach of the box crab. However, it was not just lost, as a couple of big flounders quickly placed themselves behind the crab and ate the morsels coming with the current, benefitting the flounders without harming the box crab. 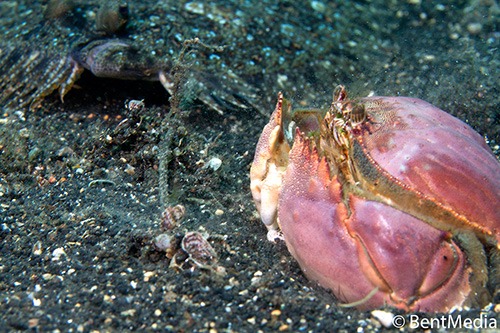 Box crab with waiting flounder
Finally, one part of the pair can already be dead when the commensalistic interaction takes place. Hermit crabs, having to find shelter for their soft anterior parts, need empty shells in order to hide the unprotected part of their body. Different snails provide these shell after the snails are dead, which means that the hermit crabs are benefitted by the presence of snails, while snails are unaffected by hermit crabs. 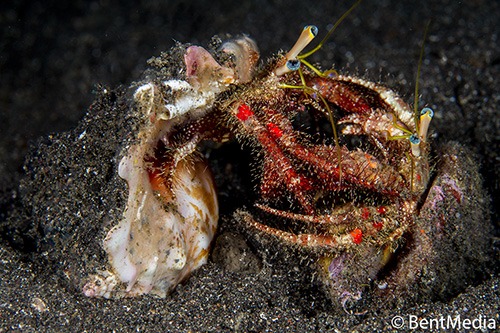 […] when he gets too close.  They also protect the corals from Crown of Thorns Starfish, such is their commensal relationship.  There also seemed to be some kind of snapping shrimp, who also didn’t like Mr Assholefish […]